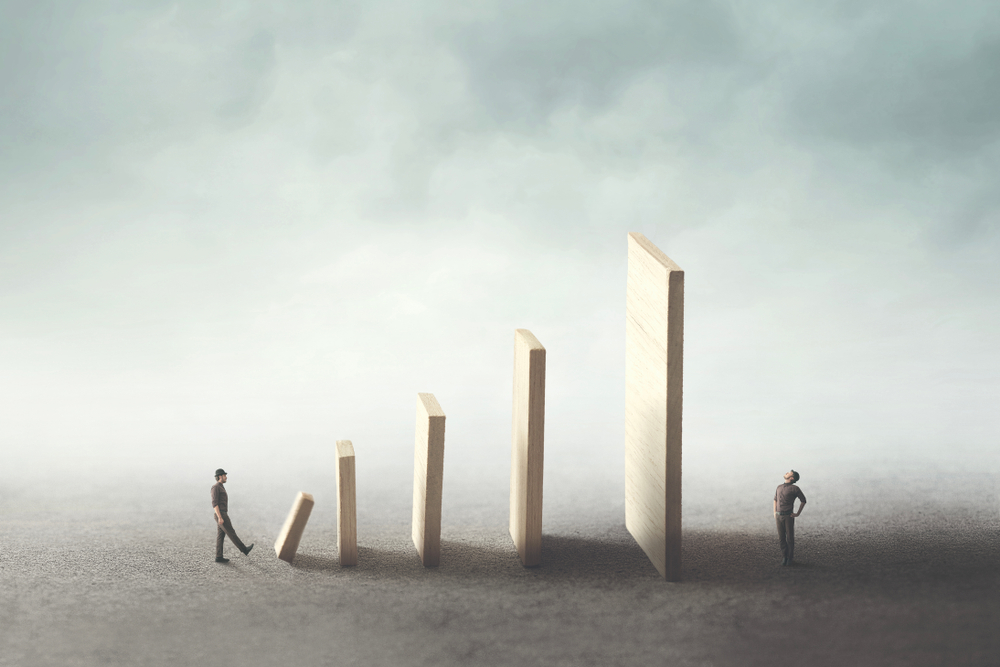 The best way of understanding the Domino Effect is to visualise a chain of dominoes, stood a few centimetres apart from each other and following a specific pattern or a single line. When you knock one domino over, as it falls it hits the next domino – and so on – creating a chain of falling pieces which are each linked and indoctrinated into the chain on both sides. Leaving a larger gap between two domino’s can cause the chain to break, with the visual Domino Effect relying on consistency.

The Domino Effect, as it has become known, takes this visual representation and inputs it into something that reflects the movement of life. It refers directly to events which occur as a result of events that have already happened, or which are already happening – creating a cumulative effect where one thing leads to another, and another, and so on. This chain reaction can be positive or negative and can change the way life plays out for one or many people.

A real life and very common example of the domino effect, and one which is typically regarded as a negative example, is the accumulation of debt – and the idea that once you are in debt, you will continue to dig yourself deeper into debt as you attempt to borrow from one source to pay off another.

On a more positive note, another example of the domino effect is the cumulative impact that investing in your own health can have. When you decide to eat more healthily, your fitness and health increase, and your tendency to fall ill decreases. These are all knock-on effects of that one decision to eat more healthily, so can be a direct reflection of the domino effect.

Some other popular examples of interesting and unbelievable domino effects throughout history include:

·        The creation of Youtube was the effect of a wardrobe malfunction. In 2004, during a performance at the Superbowl, Janet Jackson’s top slipped. When the eventual creators of Youtube went online to look for a clip, they couldn’t find one – so they quit their jobs and set up a video streaming site.

·        Prince Arthur got Tuberculosis, and this led to the creation of a new religion – the Church of England. When the Price (son of Henry VII) got Tuberculosis, he died. So, his brother became the heir to the throne and married Princess Catherine. When he later wanted an annulment, the Pope said no and so he went about setting up an alternate religion – calling himself the Head of the Church of England.

The Domino Effect and the Mandela Effect

The Mandela Effect, meanwhile, refers to false memories and the idea that different people from all corners of the world believe in different versions or false memories which relate to very real events, movies, and pop culture references. But how does this link to the Domino Effect?

It’s pretty simple – and it’s all a direct result of that chain reaction effect, which is created by a single event, tapping into one of the popular theories behind the Mandela Effect.

Look at it this way. If one person recalls a certain movie quote or song lyric, or even a specific event with some incorrect detail, but they are able to tell the story with enough conviction that people believe they are right, their false memory will spread and create a ripple effect through their network and local community. Very quickly that one false memory will multiply and create a domino effect where more people believe in the inaccuracy – giving weight to the Lindy Effect at the same time, which states that the longer a false memory is given to set seed, the longer lasting it will be in the future.

When the Domino Effect is allowed to take hold of a Mandela Effect example and cause it to grow and amass a greater following, so the false memory becomes harder to reject.

And that’s not the only way that the Domino Effect connects with the Mandela Effect.

Some of the most interesting and controversial theories which link to the Mandela Effect can be attributed to the Domino Effect – because it is this which allows one small suggestion or inkling to grow and multiply into something resembling a theory or conspiracy. The parallel universe theory, for example, is one which would have been hinted at once by a theorist – and as more people heard about it and added their own examples into the mix, the theory would have continued to grow and pick up a wider following. The same is true of the time travel theory, as well as of the false memories themselves.

And let’s not forget that the entire conception of the Mandela Effect is only widely recognised and possible because of a form of the Domino Effect – where one incident relating to the death of Nelson Mandela was used to fuel the creation of an entire theory based on false memory.

The Domino Effect refers to the cumulative impact that one event can have on the way that future events play out – and this leads neatly into not only the spread of certain Mandela Effect examples and theories, but the very existence of the theory at all.

What examples of the Domino Effect can you identify, either in your own life or in the stories you have seen online?